With the popularity and availability of hyperturbo poker games increasing every day, dedicated players have an opportunity to make money at the tables regardless if they only have an hour during lunch-break or are looking to make a career out of these high-volume, low time-commitment games.

And for those not enamored with hyperturbo poker games as a way to make a living, learning the skills required to play this format will undoubtedly improve both your tournament and regular-speed Sit & Go games, while preventing you from becoming the ‘mark’ when playing single table satellites to your favorite live and online events, an increasing number of which are being held in the hyperturbo format.

There is a wealth of information available on what you should be doing to increase your edge in hyperturbo poker games, so today I want to look at 3 things you need to stop doing that are costing you boatloads of equity and, more likely than not, cold hard cash each and every time you sit in a jackpot poker game. 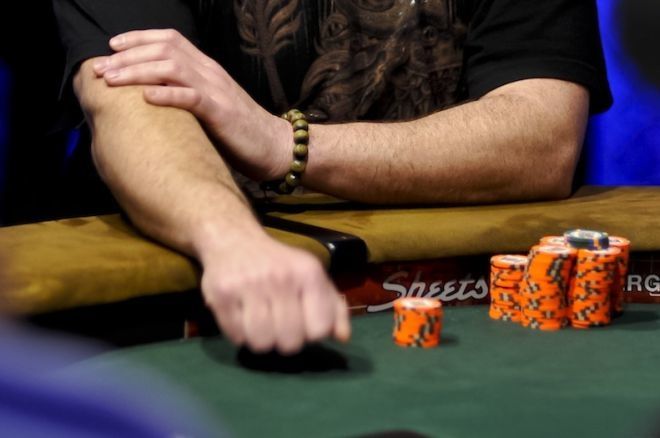 Alright yes, this is counter to nearly every hyperturbo strategy advice I’ve ever put out, and so it comes with an important caveat: while it’s true that you should, as I like to say:

Be relentlessly aggressive until your opponent gives you a reason to stop,

once the player across the table has proven themselves not to be a doorstop, the shift away from unbridled aggression has to come immediately.

Because when talking about sub 25-Big-Blind play, and especially sub 15-Big-Blind late game, you really can’t afford to be giving away a raise and cbet more than is absolutely necessary, which you are all but assured to be doing if you’re cbetting too often against good players.

The reason this can be a massive leak is because a thinking opponent will recognize that, thanks to the laws of poker averages, you simply can’t have a hand often enough to be betting as much as you are. This is what is known as having an unbalanced c-betting range, which means that you have too many combinations of one type of hand (in this case, bluffs) than the other (in this case, value). Knowing this, an intelligent player can attack the overly-aggressive c-bettor with a relentless barrage of check-raises, floats, and light call-downs, putting the loose-aggressive player in all sorts of uncomfortable spots, especially if the initial bettor is not adapt at dealing with this type of counter-aggression.

Therefore, once you’ve labeled a hypeturbo poker opponent as not being a nit, it’s critical to shift to a more balanced strategy that includes not only raises and continuation-bets, but also GTO-based optimal preflop limping ranges, as well as postflop check-back ranges that include hands a variety of hand-strengths.

2. Stop Calling The Flop And Folding The Turn

Whether you learned it from watching recent streams of the WSOP, the Upswing Poker Lab, or good-old-fashioned trial and error, most players are now aware that they simply can’t be folding all their unmade hands against aggressive opponents in 2018 or they’re liable to get run over. In hyperturbo poker games in particular, one of the only ways to deplete your bankroll faster than playing passively against an aggressive opponent is playing half-passively.

More specifically, combining light flop calls with passive turn and river play is a surefire way to quickly find yourself looking for a hand good enough to risk your last few big blinds on. In fact, this common tendency is the reason one of the very first things I focus on when working with inexperienced poker students is developing the ability to ‘triple-barrel’ (c-betting the flop, turn, and river).

Not only is it just a super fun way to play the game, but against weaker opponents who don’t have the experience or understanding of how to combat aggression in a game format that is predicated on dealing with incredibly wide hand-ranges, there is no play more powerful than putting your foot on the gas and forcing your weak opponent to either take a stand or get blinded down to nothingness.

That’s why, when you find yourself on the other end – playing against an opponent who continuously empties the clip – calling a flop continuation-bet without a plan of attack for when you don’t make top pair literally amounts to setting your cash on fire. Instead, it’s important to spend some time in the lab learning, amongst other things, how check-raise profitably and devise a comprehensive plan for turn and river play with weaker holdings.

Back when I used to stake players in the hyperturbo poker games, nothing frustrated me more than seeing one of my players check three streets with a hand that had little to no showdown value. Because even though there are times when the most profitable play is to surrender a hand, a checked-down pot with zero strength shown is likely not going to be one of them. So while it can understandably be scary to bet the river without a made hand – especially in multiway pots – my advice to my students was always the same:

Make it a personal rule for the next few sessions to stab at the pot every time it’s been checked down to the river, regardless of position, stack-size or hand-strength and evaluate the results for yourself.

Because while you’ll definitely get your hand caught in the cookie jar more than you’re used to, and you’ll need a much bigger sample size to make any definitive conclusions, my guess is that if this has not been part of your poker arsenal before, you’ll be amazed at just how often this simple play will work, and your bankroll will thank you. Just make sure to keep in mind that the smaller your river ‘probe’ is, the less often it has to work to be profitable. So when sizing river bluffs, you can either choose a standard amount such as half-pot (which needs to work 33% of the time to break even) to keep things simple for yourself, or, for non-GTO players, thinking about which weak to medium-strength hands could reasonably be expected to fold in each particular spot (taking board texture and opponent type into consideration) may help you size your bet appropriately.

So although learning how to play hyperturbo poker games is far from an overnight process, eliminating these three tendencies from your game is a great way to get a head-start on the competition and avoid some of the most common mistakes inexperienced hyperturbo players make.

The hottest cryptocurrency news of the week including USD pairings, Doug Polk roasting Suppo, and...